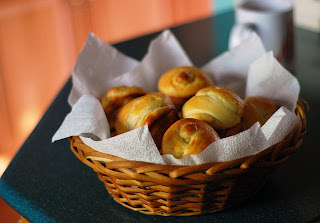 September means beginning of major soup weather.  You can (and I do) make soups all year 'round but when you make soups in September through April, no one makes faces or thinks you're crazy.  To go along with steaming bowls of delicious chicken-vegetable gumbo, I made these lovely rolls.  They made a perfect accompaniment to the soup, but the leftover rolls were amazing toasted, spread with butter and jam for breakfast or just re-warmed for a few seconds in the microwave to make them taste freshly baked again.

I used this recipe but used white whole wheat flour instead of regular whole wheat.  The dough was incredibly sticky even after rising so the cloverleaf shape was a no-go, I just did knots instead (and was reminded of my days in culinary school when we had to do 4 dozen knot rolls every day...) Anyway, if you want to do the cloverleaf shape, after forming the dough into 12 pieces, you cut the 12 pieces into 3 each and roll them into little balls, then place into the muffin cups, let rise and bake.  They are adorable, but the knots are much faster and taste just as good.  Had the dough been less sticky, I might have attempted the cloverleafs!

Combine the yeast and warm water in a large bowl, let stand for a few minutes until foamy.

Add 1 1/2 cups bread flour and the white whole wheat flour along with the honey, melted butter and salt.  Stir until a loose dough forms, then turn out onto a floured surface.  Knead the dough, adding the other 1/2 cup bread flour, until it's springy and elastic, about 8-10 minutes.

Place in a greased bowl and let rise in a warm place until doubled in size, 45 minutes to an hour.

Preheat the oven to 425 degrees F. Divide the dough into 12 equal pieces (I weighed the dough first, then divided the total weight by 12.  Each piece was about 2 ounces.)  Roll each piece into a 5-6 inch rope, then make a knot and place on a parchment-lined baking sheet or into greased muffin cups.  Cover with plastic wrap and let rise until doubled, about 20 to 30 minutes.

Beat the egg and 1 tablespoon water and brush over the risen rolls.  Bake in the preheated oven until golden brown, 12 to 15 minutes.  Serve warm.
Posted by Unknown at 11:03 AM