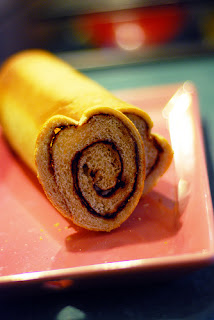 In late August my dad developed a really bad cough and he couldn't sleep at night.  A few days after he started getting better, I developed a bad cough and couldn't sleep at night.  I still have no idea what it was - my ears were plugged up, I couldn't hear, I had no voice, I was dizzy, and the lack of sleep made me no fun to be around.  The first thing I did when I started feeling better was bake bread.  It made me feel normal again to be in the kitchen, kneading dough and creating something delicious for myself and my family to enjoy on the first really cold and dark day of September.  It filled my house with warmth and one of the best scents in the world - baking bread.  There are few scents I want to smell more than bread baking after being sick for two weeks.

I used this recipe from Taste Of Home.  I made the recipe twice and made one smallish 9x5-inch loaf and the cinnamon swirl heart bread you see pictured here.  It makes a deliciously soft, fluffy and golden bread, I highly recommend this recipe for a great sandwich or toasting bread.

Combine the yeast, sugar or honey, and water in a large bowl and let stand until foamy and the yeast is dissolved.  Add the flour, salt, milk and butter and stir until a soft dough forms.  On a lightly floured surface, knead the dough until it's elastic and springy, 8 to 10 minutes.

Place the dough in a greased bowl and cover.  Let rise in a draft-free and warm spot until doubled in size, about an hour.

Fold in the dough to release the air and place in a greased 9x5-inch loaf pan.  Cover and let rise again until doubled, another 30 to 45 minutes.

Preheat the oven to 375 degrees F.  When the dough has risen, bake it until very golden brown, about 30 minutes.  Brush with melted butter.

For a cinnamon swirl bread, after the first rising of the dough, roll it out into a small rectangle.  Brush the dough with about a tablespoon of melted butter and sprinkle with cinnamon sugar and roll up tightly.  Place in a greased loaf pan, let rise until doubled, and bake like normal.

Let the bread cool as long as you can and then slice, spread with butter and honey or jam, or just eat the bread as is, taking comfort in the carbohydrates :) 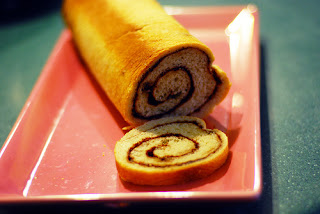 For those curious in how I got the heart shape, my boyfriend found me a retro Valtrompia heart bread tube on Amazon and it is ADORABLE.  You can use it for yeast bread and thicker cake and quick bread batters.  I love mine!
Posted by Unknown at 9:19 AM