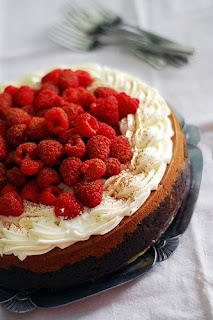 I made this sucker for the 4th of July and it was gooood.  (That weekend was quite a whirlwind due to a family reunion and a birthday as well as the holiday so I did a lot of baking and quite frankly don't remember how many things I baked, but there was at least a sweet potato pound cake, tiramisu and cupcakes in the mix...) I also made a chocolate mayonnaise cake with Duke's Mayonnaise (a present from my North Carolina buds) but I must say, it was gone before I could get any pictures.  For anyone skeptical about mayonnaise in cake, it's just oil and eggs!  People at the party I took it to made faces when I told them what it was, but then when they put a forkful in their mouths, everyone said it was the best chocolate cake they'd tasted. I hope to make the cake again soon, that way it can have its own post like it deserves.

Moving on to the main star here, though - this cheesecake is gluten free, it's easy and it's delicious.  The crust is made out of gluten free brownies, the filling made out of rich cream cheese and melted bittersweet chocolate.  I added the whipped cream and raspberries on top, but they were just for show.  This cheesecake would do just fine on its own, no matter what the situation, for people who have to eat gluten free or not.

(This recipe is adapted from a book I go to more than any other when I need to bake gluten free, I highly recommend it to any Celiac or anyone who bakes or cooks for people with Celiac's.  The recipe is originally accompanied by a raspberry coulis, hence my inspiration with fresh raspberries on top here.) 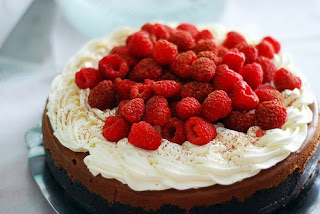 Preheat the oven to 350 degrees F. and grease an 8x8 square pan.

Combine the dry ingredients in a small bowl, whisking to make sure all the flours aren't clumpy.

In a large microwavable safe bowl, melt the butter and chocolate together until smooth and shiny.  Add the vanilla extract and beat in the eggs one at a time until thoroughly combined.  Dump in the dry ingredients and stir well to eliminate any lumps.

Spread in the prepared pan and let sit for 15-30 minutes.  Bake the brownies for 20 to 25 minutes or until when a toothpick is inserted in the middle, a bit of crumb is sticking to it.  Let cool completely, then crumble and set aside.

Preheat the oven to 350 degrees F. and lightly spray a 10-inch springform pan with cooking spray.  Press the brownie crumbs in the bottom and up the sides of the pan and bake for 10 minutes.  Set aside to cool.

Increase the oven temperature to 450 degrees F.  In a large bowl using an electric mixer or handheld mixer, beat the cream cheese until very smooth.  Slowly and the sugar and sorghum flour and beat until light and fluffy.  Add the eggs one at a time, beating well after each egg.  Add the vanilla, salt and yogurt or sour cream, and finally, fold in the chocolate.

Pour the cheesecake mixture over the cooled brownie crust.  Bake the cheesecake for 10 minutes in the hot oven and then reduce the temperature to 250 degrees F. and continue to bake for another 35 to 40 minutes or until the center is just set.  Let cool at least 30 minutes before refrigerating at least 3 hours or up to 3 days.

Garnish as you'd like, and serve in thin slices with strong coffee.  Yum :)
Posted by Unknown at 10:40 AM