Or PBD's, as my boyfriend likes to refer to them.  I've been hearing about these for years now, a candy my boyfriend's mother makes especially around the holidays.  I knew about the general idea of them and a few of the ingredients, but I wasn't able to come up with a recipe that looked accurate at all on the internet.  So luckily we got her to write it down for me :)  And sure enough, it's nothing like the ones I've seen floating around the web.  Apparently these are a very localized thing down there, they even sell them at gas stations!

These are a great little peanut butter and chocolate flavored candy, flecked with oatmeal for a lovely and addictive texture.  I highly suggest making a batch to add to your gift-giving this holiday season, or any time of year.  I plan on putting a bunch on my cookie plates as well! 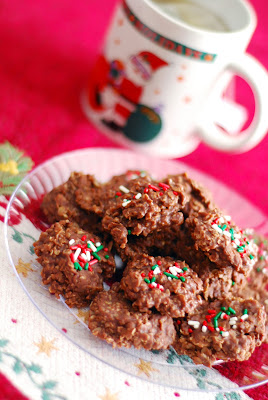 Melt the butter in a large saucepan over medium heat.  Add the sugar and bring to a boil, and let it bubble away for 1 minute.  Add the other ingredients and stir until everything is well combined.  Drop teaspoonfuls onto wax paper and let cool.

Sidenote:  as you can see, I attempted to put sprinkles on these because you can't get enough sprinkles, especially around Christmas, (although no one ever puts sprinkles on PBD, according to James, he called this a "very Beth touch.")  This proved a bit difficult, maybe because it's so cold here, but I did have to sprinkle as soon as I dropped the spoonful onto the wax paper, otherwise the sprinkles didn't stick. 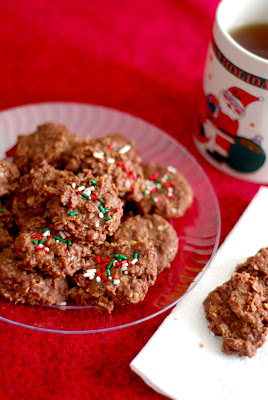