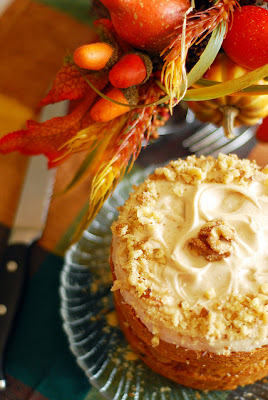 We like to buy in bulk at my house.  So I don't just buy the 15oz. cans of pumpkin, we buy the 32oz. cans of pumpkin.  So generally I have leftover pumpkin after making recipes.  I just store the leftover in an airtight container in the refrigerator for up to a month.  I had just under a cup left and didn't want to open another can so this is what I decided on.

I don't think it's any wonder why I'm obsessed with Southern food and baking since my beloved lives in North Carolina.  This recipe comes from Nancie McDermott's book Southern Cakes: Sweet and Irresistable Recipes For Everyday Celebrations, a book I go to whenever I need an easy and simple yet delicious cake.  This recipe was no exception, the only difference I made was to increase the spices and add a few additional ones as well as use dried cranberries in place of raisins.  I also halved the recipe in order to use the pumpkin I had left, but I'll post the original quantities with my changes here since I realize most people will probably want to make a whole recipe, not a mini cake and a mini loaf as I did.

This recipe calls for self-rising flour.  I'm lucky enough to have my lovely friends in North Carolina provide me with White Lily Flour, but if you don't have that available just add 1 1/2 teaspoons of of baking powder and 1/2 teaspoon of salt per cup of all purpose flour. 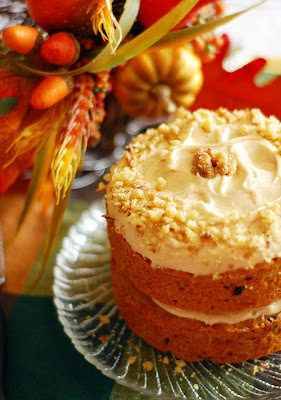 In a large bowl, combine the flour and spices until well mixed.  In a smaller bowl, stir together the oil, sugar, eggs and pumpkin.  Stir the wet ingredients into the dry ingredients until almost mixed, then add the cranberries and nuts.  Scrape the batter into the cake pan(s) and bake in the preheated oven for 25 minutes or until the cake is set on top and a toothpick inserted in the center comes out clean.

Cool the cakes completely before frosting.

Beat the cream cheese and butter together in a large bowl until well-mixed and fluffy.  Add the sugars a little at a time until it's all added, then beat for about 2 minutes on medium speed.  Add in the pinch of salt and cinnamon and beat until everthing is incorporated.

As you can see I went for the easy method this time of just putting some frosting in the middle and on top of the cake but feel free to slather this cake well as there will be plenty of frosting :) 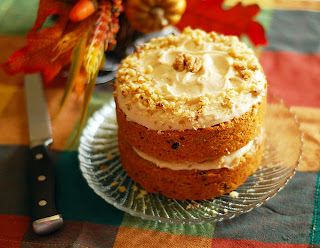