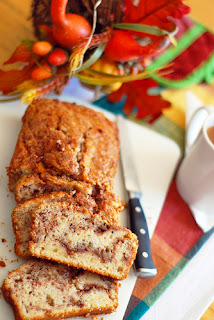 This is the kind of thing you want to smell baking in your kitchen all year long, but especially in the colder months.  It will make your house smell warm and absolutely comforting. What is it about cinnamon that makes us think of comfort and warmth?  I suppose it's because spices are used in so many holiday and cold-weather recipes, but I adore it.  Along with brown sugar and chopped, toasted walnuts, this is the kind of bread that makes cold, rainy fall mornings much easier to deal with, accompanied by a hot cup of coffee.

I've seen the card for this in my mother's dessert recipe box since I was little, but it's a very commonly adapted recipe around the internet, as are all classics.  The one from Bake Or Break is the most similar, so I'm linking to it here.  This recipe is so simple and quick, no excuse not to make it for breakfast tomorrow :) 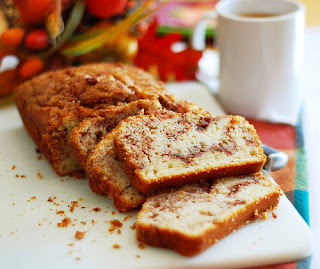 Preheat the oven to 350 degrees F. and grease a 9x5'' loaf pan.Combine 1/4 cup brown sugar, walnuts and ground cinnamon in a small bowl and set aside.

Combine 1 cup sugar, flour, baking powder and salt in a larger bowl.  In a smaller bowl, stir together the egg, milk, vanilla and canola oil.  Combine the wet and dry ingredients, making sure not to overmix.  Pour half the batter into the prepared pan, then sprinkle with half the cinnamon sugar mixture.  Repeat with remaining batter and sugar mixture.  Using a butter knife or spatula, swirl the mixtures together using an up-and-down motion.

Bake for 40-50 minutes, or until golden brown on top and a toothpick or knife inserted in the center comes out clean.  Let cool completely before slicing.  (This bread is also delicious toasted!) 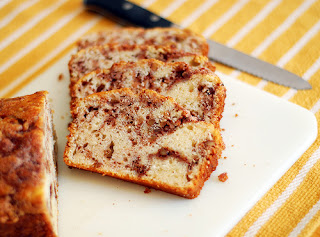