Is it really November 26th? 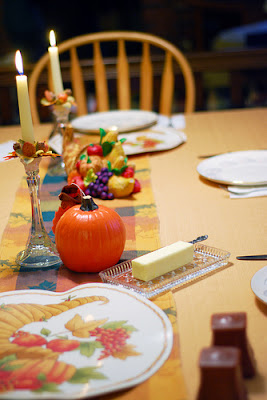 I hope everyone who reads this blog had a great Thanksgiving!  I definitely did - lots of amazing food ate with my immediate family, sister-in-law and adorable nephew.  (All gluten free, too.  We've been doing that gluten free holiday thing for a few years now, not to brag or anything :D) 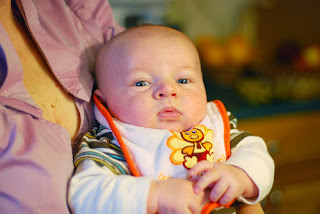 I've been a lazy daisy as far as photographing baked goods go.  The dessert recipes for Thanksgiving are going to be linked to here, and the pictures I took were just snapshots taken throughout the day, during the meal preparations.  They're certainly nothing compared to a lot of food bloggers, but they're something and the recording of recipes is what matters here anyway, even though the food setups for pictures frustrate me enough to stop posting for almost 3 weeks.  What do you do when you live somewhere the sun only makes an appearance 2 days out of 7?  It's not ideal for food photography.

Anyway, firstly I made Ellie Krieger's Pumpkin Flan and it tasted absolutely wonderful, pumpkin pie without the crust, which was what I wanted.  Perhaps I'm just jaded and lazy but I'm done with gluten free pie crusts unless someone can find me a fool-proof recipe.  They're just not worth the time and effort.  (I can't find one that's easy to roll out, I always end up piecing together the crust in the pan, so what's the point of taking the time to roll it out at all?  Plus the metallic tapioca starch taste always puts me off...)  I didn't take any pictures of this because when I inverted it onto the platter, the caramel didn't really drip down any sides since the sides were so thin (I made it in one 8-inch cake pan rather than 8 small ramekins), it just pooled in the middle and didn't look so great.  But it did taste amazing and that's what matters.  The only changes I made to this recipe were to increase the amount of spices and bake it in a large cake pan.  Served with cinnamon whipped cream on the side.

Then the chocolate cream pie - if I didn't make this, I'm fairly certain my sister would have a fit.  I enjoy it as well but I was dreading the crust.  I remembered I had some leftover gluten free vanilla cookie crumbs in the freezer and added just a couple tablespoons of melted butter and pressed those into a 9-inch pie plate and baked at 350 until the edges were golden.  This could not have worked more perfectly and I plan on doing this every time I need to make a gluten free pie, quite honestly.  Normally I use a very high-fat recipe in Lisa Yockelson's book Chocolate Chocolate, but this year I was looking for something lighter, something that wouldn't leave my stomach feeling like a brick after eating it, so of course I went to Cooking Light.  This recipe came out so nicely, so creamy, so chocolaty.  And no one knew it was "light." Success?  Success.  Only difference was that I used real whipped cream instead of the meringue.  I figured just a light slather of real cream would be just as caloric as an 8-egg white and 1 cup-sugar meringue topping.  Yes it might be poor reasoning, but it is Thanksgiving after all :) 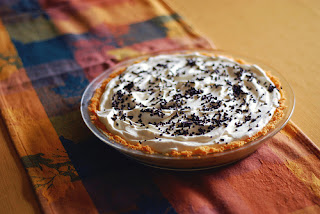