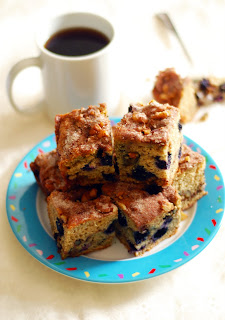 It occurred to me today that this is the last (not even full) week in April and I'd only posted a couple recipes here so far this month but I have been baking!  Laziness, I guess.  But this blueberry coffee cake is too good not to share.  It's Saturday afternoon, I just wanted to make something springy for Sunday brunch and I had some blueberries in the freezer.  These days especially, I really think the world is making things easier for dieters.  It might take a little more research and a few more clicks on Google, but you can find a low calorie recipe for anything, I promise.  Whether or not they taste good is another story - and this does.  This was so delicious!

I followed the recipe exactly as it appears except I cut it into 16 squares instead of 12, which means the calories went down from 210 per piece to 160.

Even if you aren't dieting, I highly suggest this recipe.  It tastes just as good as any full fat, sour cream, cream cheese, butter-laden coffee cake - but it's so much better for you. 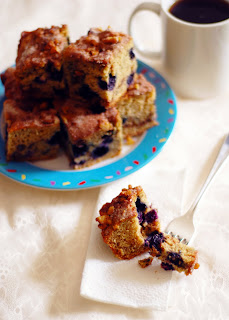 Preheat the oven to 350 degrees F and spray an 8'' or 9'' square baking pan with cooking spray.

Sift or whisk together the flours, baking soda and salt in a small bowl until well combined.  In another small bowl, combine the granulated sugar, cinnamon and chopped walnuts.

In a mixer fitted with the paddle attachment or with a hand mixer, beat the butter, canola oil and brown sugar until light and fluffy.  Add the eggs one at a time, mixing well after each one is added, and then add in the vanilla.  Next, add in the dry ingredients and the yogurt alternately, beginning and ending with the dry ingredients.  Finally, fold in the blueberries gently.

Enjoy with a hot cup of coffee or tea :) 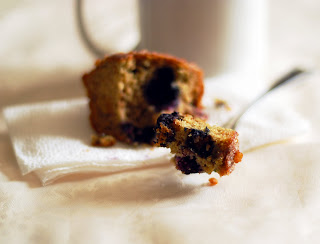