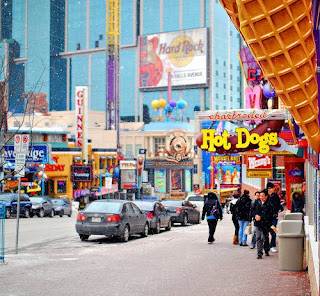 I think one of the toughest parts about dieting during the winter is the lack of comfort foods I can have. Comfort foods are notoriously and infamously rich, buttery, creamy, cheesy, chocolatey, the list goes on - not food you can eat a lot of (or frankly, any) while dieting. I couldn't tell you the last time I even had a mug of nice, steamy hot cocoa. (Clocking in at around 200 calories per mug, I refuse to drink skim milk :D)

I guess you could say my mid to late February is a lot like most people's January - since January is my birthday month, I still have something nice to look forward to after the holidays. This year, my best friend and his family came to visit me the first week of February and we had a blast. They've been gone for just over a week now. I miss everyone, my house is so quiet, and looking out my window at the snow falling, the icy roads, I want to eat an entire casserole dish of macaroni and cheese and a chocolate fudge cake. 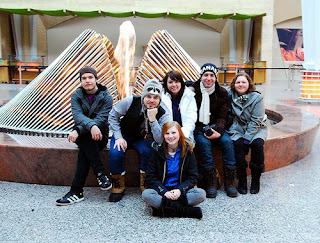 Instead, I bring you a fairly lo-cal granola from Cooking Light. Cooking Light is an amazing resource for dieters (or those who are just smartly watching what they eat) because they lighten recipes but they still keep the flavors of the original dish and in some cases, add even more flavor than before. I had a hankering for some granola last night and looked around at many different recipes and was surprised at how NOT lo-calorie it is. This version is possibly one of the best granola recipes I've had and you'd never know it doesn't have all the calories of other versions. I know granola doesn't seem very comforting, but after I made this, I sat down with a bowlful of it and a dollop of yogurt and it made me feel better. Besides, I tend to consider anything you can eat in a bowl comfort food. Just a couple more months of everything being covered in white and ice (I hope), things will be green and lush soon. Just a few more months.

This is a modified version; the original also called for 1/3 cup of groud flaxseeds and 1/3 cup dried cranberries. I didn't want to limit myself to just cranberries, so feel to add any dried fruit you want after the baking process or when serving! I should note that I used mango-flavored orange juice as well and I love the way it smelled while baking, but you can't taste it in the final granola.

Preheat the oven to 300 degrees F and spray a baking sheet with cooking spray.

Mix the oats, nuts, cinnamon and salt in a large mixing bowl and set aside.

Combine the orange juice, honey and brown sugar in a small saucepan and heat over medium until the brown sugar dissolves. Remove from heat and stir in oil and vanilla.

Pour the liquid ingredients over the oats and stir well to combine. Spread the mixture thinly on the baking sheet and bake for about 10 to 15 minutes. Stir the granola and bake for another 10-15 minutes (although mine took much longer, I wanted it crispy so I let it bake for another half hour or so). Let cool completely, add any dried fruit you'd like and store in an airtight container for up to 2 weeks.

(Calories per 1/2 cup serving with dried fruit: approximately 196)
Posted by Unknown at 4:16 PM