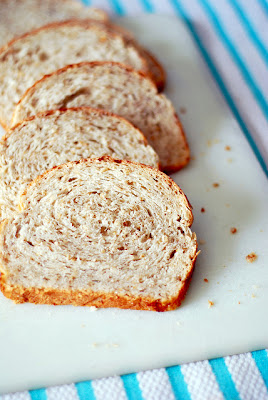 How do we end up with the things we end up with?  I don't remember how I ended up with a container of steel-cut oatmeal, but I've been trying to use it up now for about a year and finally did so with this hearty, substantial, full-of-texture bread.  I was worried the oats would be too crunchy, that there wasn't enough liquid in the dough for them to cook - you can definitely tell there's something in the bread, but they soften just enough to have a lovely, almost nutty, crunch.  If you're a steel-cut oatmeal fan, (or if you like multi-grain bread in general since the oats reminded me of millet or sunflower seeds) I highly recommend making this since the oats don't dissolve into the bread as rolled oats or quick-cooking oatmeal would do.

I've actually had this recipe printed out since March and finally had the chance to make it to go along with a warm and comforting beef stew for dinner last night, but toasted and spread with jam the next morning for breakfast made quite a treat as well :) I halved it since I only had 1 cup of oats left, and in general I don't see the need to make two loaves of bread but I imagine it freezes nicely.

Combine the boiling water, steel-cut oats, salt, butter and brown sugar in the bowl of a stand mixer and set aside for about 25 minutes to a half an hour, until cooled.

In a small bowl stir together the pinch of granulated sugar, yeast and 1/4 cup warm water and let sit for about 5 to 10 minutes, until foamy and then add to the cooled oatmeal mixture.

Add in 2 cups of flour and beat for about 5 minutes, adding another additional cup.  Take the dough out of the mixing bowl and start kneading on a floured surface, adding about a tablespoon at a time to keep the dough from sticking to your hands.  Knead the dough for about 8 minutes, until it's springy and elastic.

Place the dough in a larger greased bowl and cover with plastic.  Let the dough rise until doubled in size, about an hour.  (Or longer if it's freezing in your house, I let mine proof on the counter for almost 2 hours.)

Take the risen dough out of the bowl and press or roll it out into a longer rectangle, about 8" by 14." Roll up the rectangle tightly, making sure not to get too many air bubbles and place the roll in a greased 9x5'' loaf pan.  Cover with plastic wrap and let rise until doubled, about 30 to 45 minutes.

Preheat the oven to 350 degrees F. while waiting for the bread to rise.  After it's risen and ready to go into the oven, brush the top and sides of the bread with the egg beaten with water to give it a beautiful and shiny finish.

Bake for about 45 minutes, until golden brown on top and hollow-sounding when tapped.  Let cool completely before slicing. 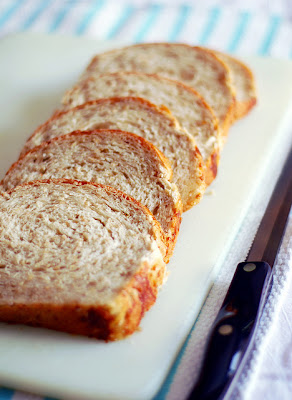